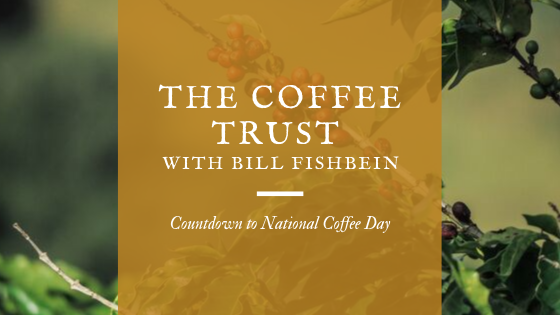 In terms of the quality and care put into our craft, we treat every day like it’s National Coffee Day at Trifecta. Therefore, we’re focusing our attention this weekend on our partnership with The Coffee Trust, a Santa Fe based non-profit organization working with coffee producers and their families. Our cupping events and special menu are directly inspired by the work The Coffee Trust is doing in the Ixil region of Guatemala and we are donating 100% of the sales from those events to The Coffee Trust in order to continue that work.

The Coffee Trust has a very wholistic approach to its methodology which their website describes as a comprehensive, integrated approach to development [that helps farmers] as they empower themselves to choose their own future based on their priorities, values, and culture. However, according to Bill things didn’t start out that way.

When I first started years ago, one of the first things that I did was help producers improve the quality yield of their coffee crop. A couple years later the price of coffee plummeted and the farmers lost everything.
At that point I decided it was time to stop talking and time to start listening. When I started listening I would hear things from farmers that I’m sure they had told me before but I wasn’t listening. Thing’s like, coffee’s not enough, when the price drops we’re in trouble, and when it rains too much we’re in trouble.
I wasn’t looking at the whole picture. Additional income is critical because coffee by itself simply isn’t enough.

The realization that focusing solely on coffee wouldn’t be enough is evident in The Coffee Trust’s list of projects:

Since National Coffee Day last year, The Coffee Trust has reached important milestones on both the La Roya Recovery project and the Women’s Savings and Microcredit program.

We started the women’s micro credit program ten years ago with twenty women who started a small micro credit business and we ended last year with three thousand women in the program. The have been extremely successful.
They walked around the corner last year peeled off fifty thousand and bought a building. They’ve got seven hundred thousand dollars in the bank. They have more money than we have.
That’s one of the things I’m most proud of in all the years I’ve done this work.”

In regards to the La Roya Recovery project, The Coffee Trust was finally able to hand over the reigns to the Chajulense coffee cooperative. The success they have had recovering from La Roya is impressive especially considering Bill Fishbein and The Coffee Trust almost didn’t get involved.

The farms that we work with came to us in 2014 and they lost eighty percent of their production due to coffee rust. Upon being asked the help my first response was no. Because we didn’t have the money to do so.
It takes quite the effort. You don’t fix it in year, it takes years. But my associate reminded me who the coffee farmers were. This particular region was ravaged by Guatemala’s brutal thirty six year civil war. In fact, half the population was murdered.
When the war ended in 1996 the coffee association provided the only economy in the region. And then after that they started a number of projects. Cardamom, cheese, honey. They had to let 300 women go as coffee sorters and 20 of those women started the micro credit program and now there are 3000.
That’s the kind of things they’ve done for the community. My associate asked now that they are in trouble, who is going to help them? How can you say no to them? I couldn’t say no to them.

I made the decision if the Coffee Trust goes down in a ball of flames trying to help Chajulense survive then there would be no more honorable ball of flames to go down in. And we did it. We were fortunate we ended last year, we were about 95 percent satisfied with what we did. Our job was to teach them what to do and give them the skills to do it.
Basically we almost went down in a ball of flames. And honestly we exhausted every bit of credit we had and every ounce of income that we had. The coffee cooperative was about to collapse and now it’s alive. Hopefully it will remain alive and well for some time to come.”

After undertaking such a financial exhaustive project like La Rosa, Bill hopes days like National Coffee Day and the New Year’s Day First Cup event will continue to grow and help support The Coffee Trust?s mission.

The income side of the equation has changed dramatically. When we first started 30 years ago, when we went into the trade with the idea of social consciousness, no one was doing it.
We were the first organization to bring social issues to the attention of the coffee trade and the first non-profit to work specifically on behalf of the coffee producers.
We were called communists until it became good for business.
When social issues became good for business all of a sudden everyone wanted to call us.
For the next twenty years, we always had funding from the coffee industry. Over the years that has changed again. It went from a business that didn’t care about people and only cared about money to a business that cares about money and people. Now it seems to be interested in product and money and people have fallen by the wayside again.
Now it’s “we buy direct trade so we’re good”.
So it’s hard to go to businesses, particularly the new wave businesses and convince them it’s not enough to pay top dollar for their coffee because the price of coffee is completely twisted.
There is no reason that the farmer should be impoverished to bring coffee to the table. I’ve never met a middle class farmer.
But the coffee price has been perverted, depressed over the years so large corporate roasters can make a profit. You can?t pay enough to bring farmers out of poverty.
In order to do that the entire industry needs to change.”

Bill is hoping to bring about some of that change by highlighting how the climate crisis affects coffee producers, compounding the challenges they already face.

There’s a lot of consumer interest in climate change and capturing carbon. The organizations that we’ve been talking with that work at origin, it’s not just about carbon capture and nutrients in the soil and all the different practices that enhance capturing carbon. It’s also about the income and social benefit for the producers.
If those things can catch the wave of interest in improving the climate then there’s some hope.”

Author: TRIFECTA413
Filed Under: Events
A Trip To Chajulense