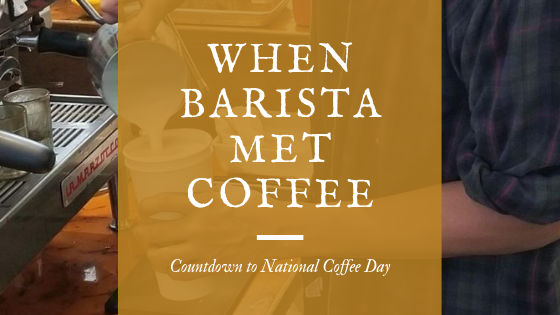 Every cup of coffee tells a story — a story about the farmers across the world who make their living cultivating coffee, about the baristas who ensure each cup is artfully crafted before handing it across the counter, and about the people who connect over that cup of coffee.

Just as every cup has a story, every barista has a story about when they first fell in love with coffee.

In 1984 I was in the USAF Crypto school in San Antonio, Texas and I started my first classes at night. My first coffee experience was drinking the mud the instructors made in the break room, I consumed copious amounts just to survive the swing shift classes. Then a few months later on a Saturday night, I went to an old Mexican restaurant on the River Walk, where I ordered a coffee along with my dessert. I was blown away with the taste! It was the very first time I had coffee that tasted like it smells. After that I have always been on a search for coffee that tastes as good as the aroma it gives off when brewed fresh.

My first words were because of coffee. Around the age of one, I was sitting on my grandma?s lap and kept reaching for her coffee cup. She kept saying ?Hot! Hot!? as she moved the cup out of reach. Later, I went outside and touched the metal slide and said ?Hot!?. So, obviously coffee was all around from the beginning and I started drinking it early in high school.

My first experience with coffee was sharing a cup with my father, it was full of sugar and cream. For years I viewed coffee as something necessary to get going for the day ahead. When I got this job my opinion changed, I saw that coffee had so much to offer. I’ve spent my time here gaining an appreciation for what coffee has to offer and learning how to deliver a consistent product.

I started drinking coffee at way too young of an age. I would hang out with my dad in the mornings before he would go to work and he would let me drink a half a cup (mostly cream and sugar) with him.

Growing up I was curious about the dark liquid I had seen both my parents and my grandparents drink. That familiar smell wafting through the house, waking me each morning. I knew I had to have a taste. I remember sitting down with my grandfather early in the morning as he recounted different tales, all while smelling the dark roast pulling up from his cup. He sat down and poured me my first cup, the warm bitterness cutting through the cold air like a knife. Ever since then I knew I would continue the tradition of making coffee that can bring back those memories.

In college, I got a job at Barnes & Noble and got stuck in the cafe instead of working with books. I didn?t drink coffee, I knew nothing about coffee, so I was kind of bitter about it (pun fully intended). Then I went to a local coffee shop and saw the care and expertise they put into their craft. It was the first time I saw what coffee was capable of and I was blown away. From then on my attitude changed from ?I don?t care about this? to ?I want to be able to do THAT?.

Come Celebrate With Us!